What does it mean to silence a voice 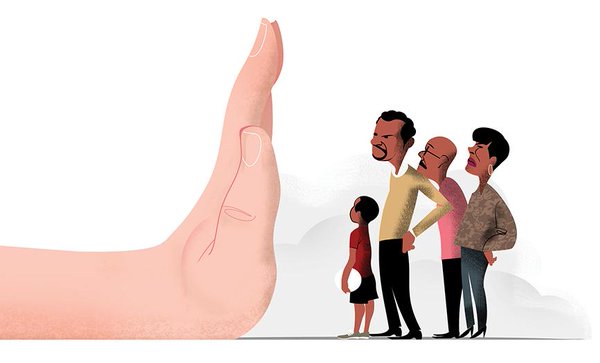 What does it mean to silence a voice

I recently wrote an article that I submitted to the doula organisation that I belong to. I spent time on it and was careful to step back and review it regularly. I asked another doula to write a companion piece. I then submitted them both.

The response to the article was not what I expected, but sadly didn’t shock me. I was told that I was unable to separate myself from the words as I was in the ‘eye of the storm’ that had the members of the organisation in a spin. I had removed myself several weeks before and hadn’t actually been enraged or involved other than to respond to comments made. I had no need to ‘fight any battles’ or lead any charges. Mine was, I felt, a voice of reason, whilst talking as a woman of colour. After recognising that a couple of voices were attempting to narrow and close the conversation, I withdrew.

I was asked to edit the article down. Having not been given a word count, I had just written. Now my word count was to reduced down to 800. I was asked to remove the second part of the article about the leadership of the doula organisation. ‘Housekeeping’ was to be kept from the magazine as the intent was to put the magazine out into the public domain, to midwives, into places where pregnant women would be.

So I had to take a decision, do I edit down the article to 800 words and do I take out the references to the organisation and the challenge to both membership and leadership? I had two conversations with the editor and sub editor. The first, apparently, was ‘heated’. The second came as I was deciding. And in talking, my decision came to me. I would be disappointed in myself if I edited it down and sanitised it and made it the ‘generic diversity in birth’ article they both wanted and expected.

So, I give you advance warning, the above is an introduction to the piece that I wrote. Following my piece is the complementary article written by a wonderful doula, Kath Harbisher.  The two pieces sit well together and should, I believe, be read together.

Hold onto your hats folks, this is a long blog.

A bit of a loaded word at the moment. A newly painful time for some, as they begin to recognise, understand and unpick white privilege. It’s a time for major denial as well. Not seeing that the very act of denial is down to white privilege. Of course, some find it hard to hear black lives matter, as they feel that saying that means that white lives don’t. Yet, that is the interpretation of the statement when one seeks to defend the status quo. This is a good time to mention that privilege is not about having money.

We are beginning to see midwives and doulas of colour standing tall against racism, for let’s not play with words, it is racism that we are talking about. With no racism, there is no need for diversity. All would already be diverse. So we need to look to ourselves and our practice and discover what it says about us.

One of the first things that happens when diversity is mentioned, is that a list is drawn up. And the longer this list gets, the further down race slips, because ‘It’s not just about race. It’s about everything’. And like that, race and ethnicity is dismissed and a broad brush is drawn across the page. Backs are patted and nothing changes. Just some words and, if we’re lucky, some images. Think. What is the first thing that you see when you look at someone?

Try to be honest. There is nothing wrong with seeing difference, but how you treat them is important. Can a person of colour present as anything other than a person of colour (unless of course their skin tone is very pale). Think once more. Within all the other -isms, who else has been bought and sold, wholesale across the world? By another, a minority, race.

It is hard to talk about race and diversity when the vast majority of the white audience refuse to accept the truth of structural, systemic racism and the resultant symptoms. “I’m colourblind”, “I don’t see race”, “The world would be so much better if people didn’t see race and colour”, “I don’t do those things”. “Race is a social construct”. All of those responses turn the conversation away from the issues and on to the speaker, and seeks to make the person of colour change their comments so that they are more gentle and therefore easier for the white ear. The conversation is difficult because the power remains with white people. They are the ones who consider being white as neutral and normal. This is borne out on stage and screen, in the media, in conversations and in the history books and in the imagery and words of our very own birth world. There remains a power imbalance in all relationships.

Of course, another reason for the responses can also be because of the fear of being outside of the group. Being ostracised is not an easy thing, particularly in a circle as small as the birth world. What if you do speak out? How will that affect you, your work, your friendships? Will you be in? Or out? A very current example of why we need to look at the things that we do, answer the questions about cultural appropriation without throwing out defensive barbs etc, is Miley Cyrus. She has ditched her “black culture” side – black culture to her meant super promiscuous behaviour (perhaps you saw footage of her on stage with her fans with their hands up her vulva and vagina under her knickers), drinking, drug taking etc etc etc – you can’t always be in the group.

And of course, when people talk about institutional racism, individuals take it as a personal attack. Within our own organisation, comments thrown about include ‘But we’re only volunteers’, ‘But the Leadership Team work really hard’, ‘You make me feel frightened to respond’, ‘You are speaking your truth, I am speaking mine’, ‘I’m removing myself from this conversation’. A person of colour cannot remove themselves from these conversations. Each of these and many other examples are ways of closing the conversation down. There is nowhere to go when someone posts to say ‘Your tone is aggressive. If others feel the same way as I do when they read your words, they won’t post and they’ll stay away’. Aggressive, up there in the top three of how to silence a black woman. Label her, or imply that she is being aggressive and threatening. Is it wrong to be angry? Or can angry only have ‘one tone’, the tone of a white woman. And where did this idea that black women are aggressive come from? Look around at our media, read the history books, look at the film and television representations. Think about how your blood pressure rises when you see birth portrayed as nothing but a dangerous event that women need to be saved from. Another way to close her down is to say ‘Not just black women. All women’. All lives matter people. Never forget that all lives matter.

Of course, when black women, women of colour, the women of colour who struggle with that term, begin to say that they feel excluded, or shut down, or discriminated against, they cannot be believed without examples. ‘I need to understand where and how this happens’. ‘I need you to explain to me what it is’. ‘That hasn’t been my experience’. Would it be reasonable for a rapist to question their victim and ask ‘When and how were you raped?’ ‘How do I stop raping you?’ ‘I don’t feel you were raped’. Is it for the oppressed to teach the oppressor how to stop oppressing? If your white privilege has been pointed out to you, is it up to people of colour to teach you how not to use micro aggressions?

So what can my doula organisation do? If it is truly a members organisation, made up by and for its members, then it starts individually. It’s time to do some research, talk to one another – though probably not a woman of colour, because we are tired of that conversation. It’s time to become personally accountable for your own place of privilege. What can the Leadership Team do? The same as the individual members. They are not above anyone else, though they are held to a higher standard, or at least should be.

It’s not about adding some images to the website, though that remains a good idea. It’s about proportional representation, at the very least. With that in place, we can start to clean up the ills like institutional racism. But before that can happen, this doula organisation need to find a way to re-engage with the doulas of colour who not only feel unsafe, but have distanced themselves. We are an organisation who pride ourselves on listening and being, unfortunately it is not an option given to the doulas of colour.

Before they can be listened to, they need to be ‘believed’, challenged and the decision about whether or not they are speaking truth, is decided by the very people they have stepped away from. Being continually told that no one has brought the issues to the leadership, or that the issues can only be dealt with by the leadership is not true, merely obstructive. The issues have been brought, ideas suggested and ignored. Closing down and censoring opinion ‘because it is felt to be negative’ is never a good move. This subject has plenty of negativity about it. Doesn’t mean that we should paint it pretty and shy away from it.

This is something that the entire membership needs to take ownership of, individually and collectively. By understanding white privilege and taking action, much can be achieved. If we continue to do as we have always done, if we continue to look to those we have always looked to, nothing will change and diversity will not prevail and racism, systemic, covert and overt, will continue. When we do not challenge it, even when the words come from those held up as the doula organisation’s icons, nothing will change.

Doulas of colour are not asking to become white doulas. They wish to be part of a multi-culture, not a mono-culture.

“I’m starting with the man in the mirror. I’m asking him to change his ways”
CLICK HERE TO READ KATH HARBISHER’S CONTRIBUTION.
Contact us here and come join us, as we welcome new life into our world and let’s change it, one birth at a time.